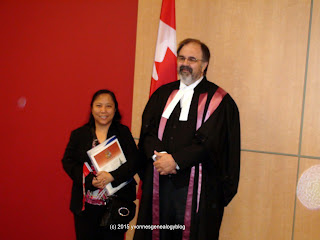 My sister-in-law Nenita poses with the citizenship judge after she became a Canadian four years ago today (September 30).

Birth of François Desgroseilliers in 1804

François fils is my maternal 3x great-grandfather. He was born on 22 September 1804 and baptised that day in St-Joachim parish church in Châteauguay, Lower Canada (now the province of Quebec). [1]

His baptism record, seen above, reads:


“The twenty second of September of [1804] by / us was baptised françois born of this day of the legitimate marriage / of françois degrossellier laborer and of Louïse roi. the godfather / ambroise degrossellier and the godmother Catherine merlot / [no one] knew how to sign [their names] [as requested].”


François had five brothers (Joseph, Michel, Charles, Jean-Baptiste, Jean-Baptiste, and Gabriel) and four sisters (Marie, Louise, Marie, and Sophie). When he was 23 years old, François married Elisabeth (Isabelle) Lemieux in January 1828. They had eleven children, born between 1829 and 1852, before François died in August 1853.

Friday’s Faces from the Past: A Desgroseilliers Cousin’s Wedding 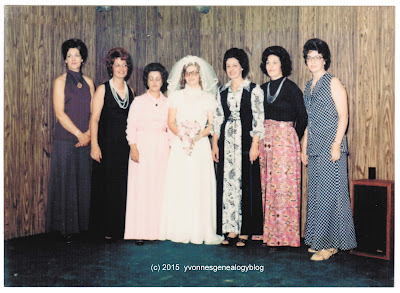 This early 1970s photo of my mother Jacqueline shows her and her sisters at their cousin’s wedding. Mom thinks it might be Nicole Desgroseilliers, who married in September 1974. If she’s correct, then Nicole is the youngest child of Joseph Desgroseilliers, who passed away suddenly when she was three weeks old. (Joseph was the youngest sibling of Mom’s father, Eugène.)

From left to right are Normande, Jacqueline, Simone, the bride, Mariette, Madeleine, and Jeanne d’arc. It was rare for Mom and her sisters to be all gathered in one place as adults, so it's wonderful that the photo not only celebrates Nicole’s wedding, but also records that the six Desgroseilliers sisters were at the event.

Email ThisBlogThis!Share to TwitterShare to FacebookShare to Pinterest
Labels: Friday's Faces from the Past, Jacqueline Desgroseilliers

Peter Fred Plotnikoff passed away on 5 September 1998 in Grand Forks, British Columbia. I never asked Pop about this particular obituary, but I suspect that he saved it, because he and Peter were friends going back to their days when they picked fruit in the Okanagan orchards of BC in the 1940s. My husband Michael remembers working with a man named Pete Plotnikoff at the Grand Forks’ division of Pope & Talbot, a lumber company, in the 1970s, so that’s probably another connection.

The text appears to have continued in the next column, so Bill wrote the remaining few words at the end of the obituary. (I recognize his handwriting.)