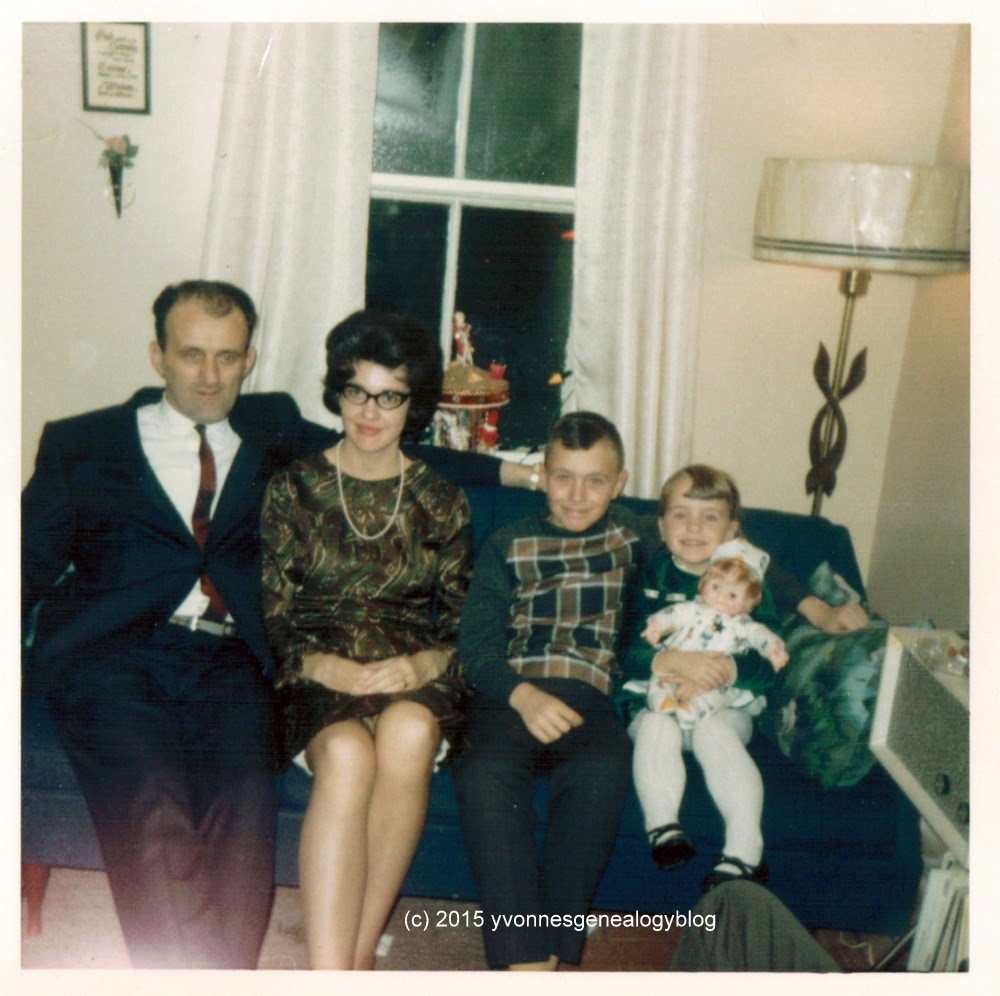 That’s my Aunt Jeanne d’arc, Mom’s youngest sister, in the above photo. She poses with my new uncle and step-cousins in our living room on Commercial Avenue in Timmins in December 1967. It was their first Christmas together, because Joan and Leno had married earlier that June. (See Wedding Wednesday: Bozzer – Desgroseilliers for my memories of that day.)

Tomorrow – February 23 – marks the 30th anniversary of Uncle Leno’s passing. He was only 60 years old and was survived by my Aunt Joan and their children, my cousins Wayne, Suzanne, Kathy and Pamela.

Uncle Leno, a tall man, was a fine athlete and loved to play baseball. I remember going to one of his games at our town's municipal Hollinger Park when I was a teenager. I didn’t know much about the sport, so it was sort of difficult to follow, but it was fun to personally know one of the players. Uncle Leno also liked bocce. I can still see him playing the game in summertime with neighbors in the back lane behind his house, while Aunt Joan, Mom and I watched as we ate our dessert after supper. And I’ve never forgotten the time when, as manager of the Palace Theatre on Third Avenue, he let me in for free when he saw me in the lineup waiting to pay for the Saturday matinee.

Still remembering you, Uncle Leno, after all these years.

I’m participating in “52 Ancestors in 52 Weeks: 2015 Edition” by Amy Johnson Crow of No Story Too Small.

For the 7th week of this challenge, I used the optional weekly theme (Love) and chose Marguerite Bouvret (1784-1829).

The ancestor that I love to research is the one for whom I can find records. I especially love it when I find a baptism or burial record that solves a ‘brick wall’. And that’s what happened last week – I solved a brick wall when I found Marguerite’s burial record.

I knew when and where my maternal 4x great-grandmother Marguerite Bouvret was baptised and married, but I couldn’t locate her burial record. I had an estimated date of death for her, though, between 1824 and 1829, but not the exact date or place.

Marguerite was the younger daughter of Etienne Bouvret (Beauvais) by his first wife Marie Elisabeth Gibouleau (Gipoulou). She was born on 12 July 1784 and baptised as “Marie Marguerite” the next day in St-Henri church in Mascouche, which is a little to the north of Montreal. [1]

When she was 23 years old, Marguerite married Joseph Pinault dit Deschatelets on 11 January 1808 in Ste-Anne-des-Plaines. [2] The couple had eight children over the next fifteen years: Marie Marguerite, Angèle (Angélique), Joseph (my ancestor), Victoire, François, Louise, Pierre, and unnamed child of unrecorded gender who died at birth.

It wasn’t until last week that I realized I hadn’t looked for Marguerite’s “Individu” file at Programme de recherche en démographie historique (PRDH). I don’t know why I didn't look there for her, especially since I’ve used that site for years, but I quickly remedied that situation. It's a good thing that I did, because Marguerite’s file included her death and burial details. At last! I now knew that my ancestor died on 9 April 1829 in Ste-Anne-des-Plaines and that she was buried there on 11 April 1829. [4]

Because PRDH is just a database, I then turned to Ancestry.ca to view the image of Marguerite’s burial record. [5] I was surprised to see that her surname wasn’t Bouvret or one its variations like Beauvais; instead, it was Comptois. For some reason, Ste-Anne’s parish priest made a mistake when he wrote Marguerite’s surname, which would explain how I ignored this entry when I originally skimmed the images of Ste-Anne’s sacramental registers for 1824 to 1829.

I’m satisfied that this burial record is the right one for my ancestor Marguerite for the following reasons:


Note to self: next time I’m facing a brick wall, make sure to search all the usual databases and not just some of them.

6. “Le LAFRANCE”, database, Généalogie Québec (www.genealogiequebec.com : accessed 13 February 2015). A search for a marriage for “Pinau” (and Deschatelets) and “Comptois” between 1774 and 1829 proved negative.

Friday’s Faces from the Past: Eugene Desgroseilliers with his brother and niece 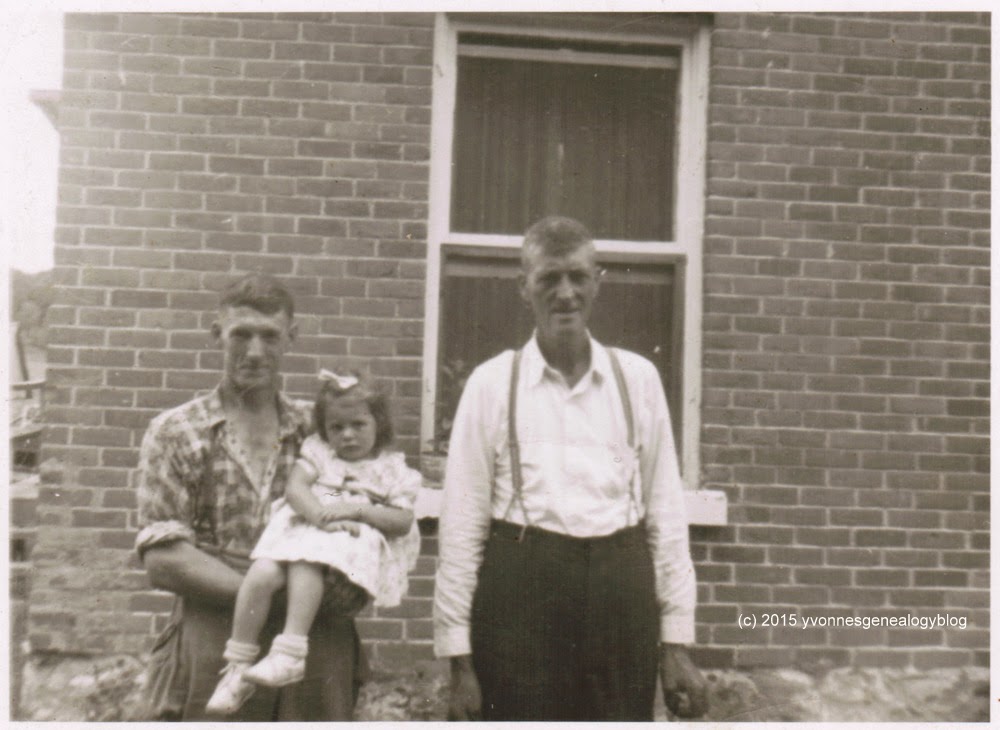 Eugène Desgroseilliers (centre) with his brother Donat and their niece Lina,
about 1955-1957


I love finding photographs that shows my maternal grandfather Eugène Desgroseilliers. I first saw this picture when my Mom’s older sister Madeleine gave it to me in October 2011. Aunt Madeleine was on vacation in British Columbia that year and brought with her an envelope filled with pictures and other memorabilia that she gathered for me.

Two people are identified in the photo, because someone (it’s not Aunt Madeleine’s handwriting, which I recognize) wrote on the back of it:

Whoever wrote these names forgot to add Eugène’s. There are no other details on the back or front of the picture like when and where it was taken. I think it dates to 1955 or 1956, since Lina looks about 3 or 4 years old. Donat and Ovila (not shown in the picture) are Eugène’s younger brothers, while Lina is his niece. The trio presumably posed at a relative’s home in Sturgeon Falls or Bonfield, near North Bay, Ontario. Alternatively, the picture was taken in August 1957, when Eugène travelled from Sarnia to Sturgeon Falls for his brother Joseph’s funeral.

Can any of my Desgroseilliers cousins fill in the blanks for this photo?