Almina (Belair) Lapierre was the half-sister of my paternal grandfather Fred Belair. She was born on 8 July 1902 in Ste-Cécile-de-Masham, Quebec. She was the fourth child and youngest daughter of Pierre Janvry dit Belair by his second wife Mathilde (Domitille) Cloutier. Pierre had 11 children, including my grandfather, by his first wife Angélina Meunier, and 5 children by his second wife Mathilde.

Almina married Alexandre Lapierre on 9 November 1927 in Masham. I don’t believe that I ever met Alex, who died in 1981, but I knew Almina, because I met her at her daughter Suzanne’s home in Aylmer, Quebec in the early 1980s. I remember being thrilled and honoured to meet her: she was my grandfather’s only surviving sibling by that time when my Dad and I visited her. She was very kind to us, and didn’t mind my asking her lots of questions about my grandparents Fred and Julie. She and my Mémère Julie were great friends and I loved hearing her reminiscences of when they were young. 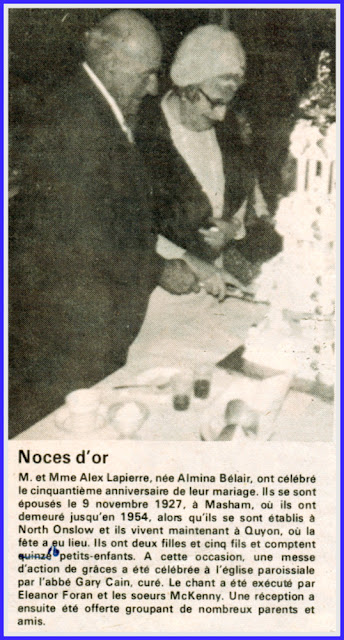 Golden Wedding [Anniversary]
Mr. and Mrs. Alex Lapierre, née Almine Bélair, celebrated their fiftieth wedding anniversary. They were wed on 9 November 1927, at Masham, where they resided until 1954, when they established themselves at North Onslow and they live presently at Quyon, where the celebration took place. They have two daughters and five sons and count fifteen [16] grandchildren. On this occasion, a mass of thanksgiving was celebrated at the parish church by abbot Gary Cain, priest. The singing was performed by Eleanor Foran and the McKenny sisters. A reception followed bringing together numerous family and friends.